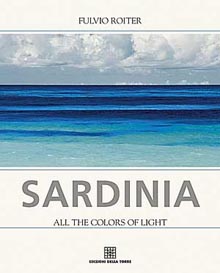 Sardinia. All the colors of light

The photographs of Fulvio Roiter (that is, the photos compiled in this book) create, in the heart of a Sardinian, more a sense of gratitude than astonishment for their unequalled artistic inspiration. The works of great photographers are distinguished by their capacity to make you see something right under your nose that you have not really seen, and to see it not only as if it were the first time but in depth, into its very core and essence. Roiter also becomes excited, even before those who look at his work, when he describes the road he has taken, the rocks he has climbed, the maquis vegetation or forest he has penetrated, the view he has found to realize these photographs. Each one has its own story to tell: not only of the subject itself, but also the fatigue and intelligent stubbornness it cost to take the photo. Rarely, if ever, does Roiter shirk from his task. It is as if that extra sacrifice–physical as well as mental–required by the photographs were the price one has to pay to the god of photographic images, even when they are already there on the film and printed. Those images speak to us. They tell us the story of the island-continent, helping us to understand a bit more about it. This is the most one can demand of one’s work, and achieving it is already a state of grace that must be acknowledged.

Recensisci per primo “Sardinia. All the colors of light” Annulla risposta